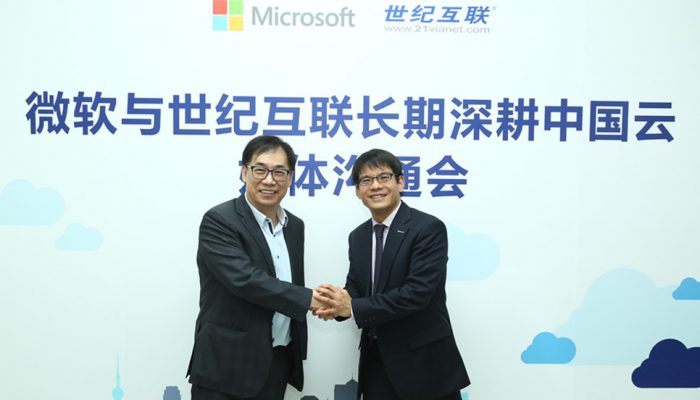 Josh Chen, 21Vianet Founder and Chairman said, “The fruitful collaboration between 21Vianet and Microsoft to introduce Azure and Office 365 to China has been well proven by our business success over the last four years. 21Vianet has been recognized as a reliable local operator with whom to run network, data center, and cloud services. Together with Microsoft, we are providing world-leading, qualified, trustworthy, and intelligent cloud services to Chinese customers. With our agreement now extended, we will continue to invest more in providing ever-evolving cloud services to our mutual customers.”

Alain Crozier, Microsoft Corporate Vice President, Chairman and CEO of Greater China Region, said, “Digital transformation powered by technological innovation is unveiling significant opportunities for businesses in every industry. China, with its clear strategy of innovation-driven development, possesses unique strengths that will allow it to win with the new industrial revolution. With years of successful operations behind us, we are confident of our strong partnership with 21Vianet and of the unique business model we have created. We believe in the long-term potential of the China market, which is why we want to reconfirm our commitment and are extending our agreement with 21Vianet.”

Since its establishment in 2013, 21Vianet’s cloud operation and maintenance group for Azure and Office 365 in China has grown from dozens of people to one of the largest professional cloud operation and maintenance teams in China. Their staff is more than 50% senior engineers. With user satisfaction over 98%, Microsoft Azure and Office 365 operated by 21Vianet have been widely recognized in the industry and have received 10 trusted cloud certifications, including cloud hosts, cloud storage, databases, cloud engines, network load balancing, enterprise-class e-mail, file sharing, online meeting, cloud backup and hybrid cloud, making 21Vianet the cloud service provider with the most trusted cloud certifications in China. In 2017, Microsoft Azure operated by 21Vianet, passed the industry’s first “Hybrid Cloud Solution Assessment” and was awarded the only “Trusted Cloud Technology Innovation Award-Hybrid Cloud Award” by the Trusted Cloud Conference. In accordance with the latest regulatory requirement on cloud services, 21Vianet, as the operator, obtained the newly required Internet Resource Collaboration Service (IRCS) license in August 2017, which ensures the compliance of its cloud services in China.

With a growth mindset and strong confidence in the China market, 21Vianet and Microsoft are in the process of expanding their capacity. As Microsoft CEO Satya Nadella announced at the Microsoft Tech Summit 2017 in November, Microsoft Azure operated by 21Vianet will triple its capacity in China in the beginning of 2018. Azure’s enlarged capacity will provide increased flexibility and wider access to cutting-edge Azure cloud services. It will also make it easier for multinational companies to meet the needs of Chinese customers through the scale, power, and secure infrastructure of the Azure cloud.